Although oft overlooked and somewhat lackluster, these two peaks offer amazing panoramas over the heart of the San Gabriels. Gorgeous weather and some lean hiking months drew me to the mountains. I’ve visited both peaks multiple times, but it’s time to return. During the Colby Fire of January 2014, the Forest Service cut dozer lines on the ridges of Glendora Mountain, so I’ve wanted to see how it impacts the hike to the peak. And I’ve not hiked to Summit 3397 from the north, so this would be a good chance. 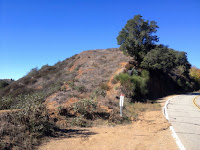 The drive up Glendora Mountain Road (GMR) is somewhat dicey with all the bicyclists coming and going. They really put themselves in danger sharing the narrow, windy road with motor vehicles. Around every bend I face the possibility of cyclists in the middle of the lane. I finally reach the trailhead at mile marker 6.50. I don’t need an Adventure Pass since the rules have changed and passes are required only in locations with guest amenities. 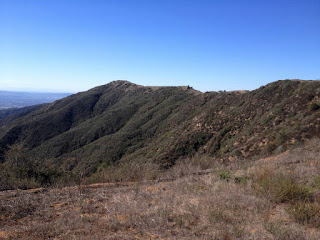 10:00 AM – Begin hike (3120’). The temperature is pleasant in the upper 60s with warm sun and gentle breezes. The route heads west up the firebreak following a narrow path along the right edge. Cut brush covers the break (probably to limit erosion). Seven minutes delivers me to the first high point (3311’) along the undulating ridgeline, now bending south. It’s quite peaceful here aside from the occasional roar of motorcycles along GMR…the epitome of noise pollution. The ridgeline offers a spectacular 360-degree panorama of the surrounding San Gabriels and numerous peaks which have become familiar friends. 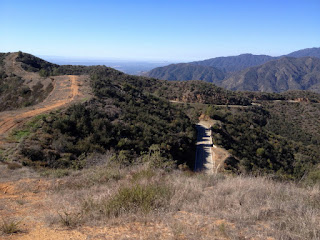 There is virtually nothing in bloom aside from some lingering California buckwheat and a few asters and sunflowers.

I can hear occasional gun shots from the Burro Canyon Shooting Park about four miles north as the crow flies. The sky is blue and cloudless. Up and down I go along the rollercoaster ridge. For the most part it’s easy going. The firebreak has softened with nearly two years of vegetation growth. I see virtually no trace from the 2002 Williams Fire and the 2009 Morris Fire, which incinerated most of this mountain; chaparral rebounds well. The last time I was here (February 2011), the temps were in the 40s and I was leaving boot tracks in an inch of snow. Today is quite different. 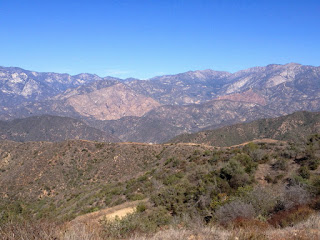 I’m enjoying the grand scale of the scenery. To the north about 4.5 miles in the San Gabriel Canyon, the footprint of the August 2015 Cabin Fire, which consumed more than 1,700 acres, stands out a tan scar on the southeast slopes of Smith Mountain and vicinity. To my left (east) I peer down into the upper reaches of Little Dalton Canyon blanketed with rich green vegetation. Looking down into San Gabriel Canyon on my right (west), I see cars snaking up Hwy 39. San Gabriel Reservoir comes into view to the northwest. The water level is still low but a predicted El Niño for this winter could fill it up to overflowing. Noisy vehicles on GMR remind me I’m not really in a wilderness. Over each bump on the ridge I get closer to my destination. 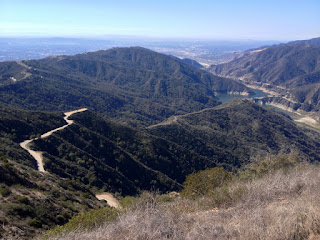 10:35 – Glendora Mountain (3322’). Achieving the summit is not that climatic since there were sweeping views all along the ridge route. I am, however, now rewarded with a grand view south. Haze somewhat mutes the human sprawl in the valleys below. The Downtown L.A. and Century City skylines are but faint silhouettes in the distant southwest. Catalina Island forms a faint line on the horizon. Across the canyon to the east stands Summit 3397 inviting me to climb it next. 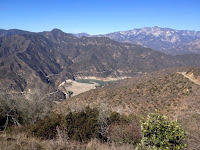 I sign the peak register, contained in a white PVC tube lodged in a small pile of rocks.

The summit doesn’t get a lot of traffic. The last visitors were a group of seven on October 24—two weeks ago. The logbook was started on May 17 with a group of 13; I recognize some of the names as Sierra Clubers. Glendora Mountain is on the Sierra Club Angeles Chapter Lower Peaks Committee List. I linger for a long time just enjoying the expansive scenery and solitude. 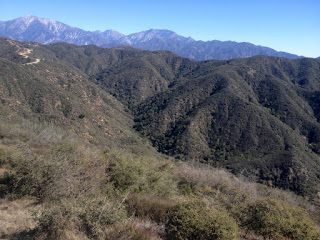 11:35 – Leave summit and retrace my steps along the rollercoaster ridge. My car is a speck on the distant road. A sweeping northern panorama of the central San Gabriels spreads out before me. I survey ridges and peaks and ponder hikes I’ve done and potential new adventures. GMR is pretty close below via several ravines along the west-facing slopes; I’ve considered if any of these would provide a viable shortcut from the road to the ridge, but the brush is so thick that only an animal would attempt such a passage.

And a shortcut…really? The whole hike is only 2.0 miles round trip! I curve around to the east and begin descending my last 191 vertical feet to the end. 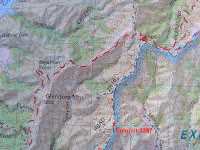 I continue my drive east on GMR 1.2 miles to the large turnout for Forest Service road 2N16 (Lower Monroe Road) on the right (there is no mile marker here but 5.08 is 300 yards further east). A couple vehicles are unloading mountain bikers for a one-way a ride down 2N16. I’m wonder if the one young lady driving away is the girlfriend of the rider she dropped off. That’s one way to a guy’s heart. I linger in the car, have a bite to eat, and study the map. 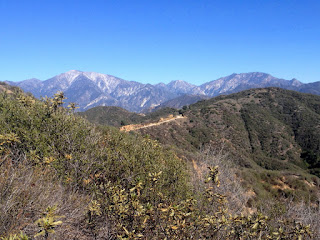 12:40 – Begin hike (3420’). Walk past the locked vehicle gate and head south on 2N16, Lower Monroe Road (aka Lower Monroe Truck Trail). In few minutes I round the bend and see my summit in the distance. It seems like a long way away. Soon I am rewarded with great views east and west as the road follows the rollercoaster divide between Little Dalton Canyon on the right (west) and Monroe Canyon and the Big Dalton Canyon watershed on the left (east). The sun is warm and a few wispy clouds now add interest to the blue sky. The dirt road shows the heavy traffic of bicycles. I’m surrounded by thick chaparral. Shy of 15 minutes (0.6 mi.) I reach a fork. The left heads up past an apiary clearing (for bee hives) to high point 3386. I may hit it on my way back. The road bends right to bypass the highpoint. It’s just a beautiful day for sauntering through the rugged scenery.

1:13 – Junction to the summit. The road continues to the right but I veer left past the apiary clearing and climb the old firebreak.

Views east become outstanding, but they are even better when snow blankets the high country.

1:26 – Summit 3397. The broad top is mostly rimmed with high vegetation obscuring views except for east. I photograph the eastern panorama before wandering around the summit.

I’ve been here three times before, but those were from the south (twice from Mystic Canyon Trailhead in Big Dalton Canyon, 2,217 vertical feet below, and once from little Dalton Canon). I wander over to the clearing with great views south. Before me lies the San Dimas Experimental Forest.

Beyond is the vast human sprawl. The sun gleams on the distant ocean.

I attempt to find a spot to take a pic west toward my earlier peak, but there’s too much brush. 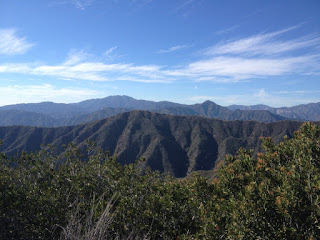 1:50 – Leave summit and retrace my steps down. A spot on the ridge gives me a shot west to Glendora Mountain. Seven minutes delivers me to the road. I enjoy the scenery as I amble along.

A small snake about 12 inch long slithers across the trail and disappears into the brush before I can snap a picture of him. His coloring suggests a gofer snake. At the junction past high point 3386, I double back, walk past the apiary clearing, and walk the 200 yards to the summit. It’s brushy and nothing to write home about, but it does provide a nice view south toward summit 3397. Back on the road I continue north. Green toyon berries promise to add a splash of red to the coming winter chaparral. Firebreaks on slopes north of GMR beg to be explored.

I’m done. I drive east another 0.3 mile to the junction of GMR and Glendora Ridge Road. I get a nice shot back toward Summit 3397. 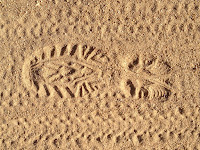 Epilog – A very pleasant outing! The weather was simply gorgeous. The distance was not great (2.0 mi. r.t. for Glendora Mt. and 3.0 mi. r.t. for Summit 3397), but the satisfaction level was high. It’s amazing to me that I can be on such fine trails within 20 minutes of massive human sprawl on a beautiful weekend, and encounter no one. In fact, on Glendora Mountain, I had quite a prayer meeting feeling the seclusion of the summit sanctuary. Being in nature always inspires me toward communing with the Creator.